Have you ever had water that had a dis-satisfactory color, odor or taste? You would wonder if it was safe to drink, wouldn’t you? At NCWSA, we understand that you only expect the best water that is pleasing to sight and smell and guarded against pathogens. Two water sources supply water for two treatment facilities that produce a blended water for customers . Lake Varner, an 820-acre reservoir, is the source for Cornish Creek Water Treatment Facility. Cornish Creek WTF is an up-flow clarification facility permitted for 25 MGD (Million Gallons per Day). Ninety- five percent of the water produced in 2014 by NCWSA came from Lark Varner. Williams St. WTF is a conventional plant capable of producing 4.0 MGD. Its source of water is the Alcovy River. Cornish Creek WTF pumps water from the Alcovy River to City Pond Reservoir where it gravity flows or is pumped to Williams St WTF. Contaminants and potential pollution sources in a watershed are identified in a source water assessment plan . A source water assessment plan for the Alcovy River watershed has been completed. The overall susceptibility of the water was rated medium. The greatest potential threat to source water quality is agricultural waste ponds and secondary paved roads . The recommendations from the plan will ensure that citizens served by NCWSA will be provided with the best quality water in the future.

About Your Drinking Water

The sources of drinking water (both tap and bottled water) include rivers, lakes, streams, ponds, reservoirs, springs, and wells. As water travels over the surface of the land or through the ground, it dissolves naturally occurring minerals and in some cases, radioactive material, and can pick up substances resulting from the presence of animals or from human activity. Contaminants that may be present in source water include:

In order to ensure that tap water is safe to drink, the U.S. Environmental Protection Agency (EPA) prescribes regulations, which limit the amount of

Drinking water including bottled water, may reasonably be expected to contain at least small amounts of some contaminants. The presence of contaminants does not necessarily indicate that water poses a health risk. More information about contaminants and potential health effects can be obtained by calling the EPA’s Safe Drinking Water Hotline, 800-426-4791. Some people may be more vulnerable to contaminants in drinking water than the general population. lmmuno-compromised persons, such as persons with cancer undergoing chemotherapy, persons who have undergone organ transplants, people with HIV/AIDS or other immune system disorders, as

well as some elderly and infants can be particularly at risk for infections. These people should seek advice about drinking water from their health care providers. EPA/Center for Disease Control (CDC) guidelines on appropriate means to lessen the risk of infection by Cryptosporidium and other microbial contaminants are available from Safe Drinking Water Hotline, 800-426-4791. 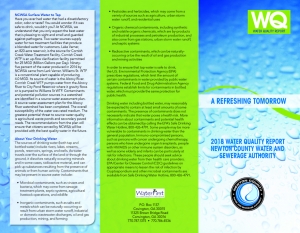 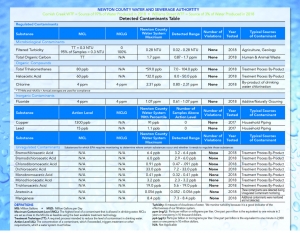 Scroll to top Secured By miniOrange