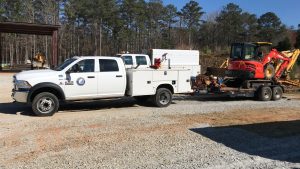 How to Check For Leaks

A small leak, about the size of a pin head, dripping at one drop per   second can add up to 7 gallons of water a day. A large leak, the kind most often found in toilets, can waste 200 gallons of water or more per day! Check out the following when you suspect a leak:

Faucets
Check faucets in the bathroom and kitchen periodically.
Worn washers are most often the cause of dripping faucets.

Sprinkler Systems
Broken sprinkler heads or damaged underground pipes are common sources of sprinkler system leaks. Watch your system run at least once per month to spot problems early. Usually, leaks are easy to fix. Do-it-yourself books with easy to follow instructions are available at libraries and home improvement stores.

Toilets
Check toilets for leaks often. The most common causes of a leaking toilet are:

How To Read Your Meter

Use the following example to help read your meter:

Protecting Your Water Against Contamination

Congress established the Safe Drinking Water Act (SDWA) in 1974 to protect human health from contaminants in drinking water and to prevent contamination of existing groundwater supplies. This act and its amendments (1986 and 1996) require many actions to protect drinking water and its sources. One of these actions is the installation and maintenance of an approved backflow prevention assembly at the water service connection whenever a potential hazard is determined to exist in the customer’s system. Without proper protection devices, cross connections can occur.

What is a cross connection?

Any connection which permits non potable water to enter a water distribution system. When this occurs, your drinking water can become contaminated.

OK. So? What is backflow?

Backflow is when the water in your pipes (the pipes after the water meter) goes backward (the opposite direction from its normal flow). There are two situations that can cause the water to go backward (backflow):

To protect the water system, two kinds of backflow prevention methods (ways to prevent the backflow of water) are required for all business customers that present a potential hazard to the water system:

What is considered a potential hazard?

ANY possibility of pollutants, contaminants, and system or plumbing hazards. For example: fire protection systems, irrigation systems, gasoline refineries and stations, restaurants, hospitals, and manufacturers. Just to name a few.

To keep your drinking water safe, the Newton County Water & Sewerage Authority diligently checks the plans of each new business for compliance with cross connection/backflow requirements. We take pride in the water we provide and will continue to protect it and our citizens. All residential meters come installed with a AWWA approved backflow prevention device.

Over half of the nation’s cross connections involve unprotected garden hoses. In Kansas, a man died from drinking out of his garden hose. He had been spraying the yard with poison to get rid of bugs and had connected his garden hose to the spraying device. Unknown to him, during the spraying, a drop in pressure occurred in the main water system causing the poisoned water to backflow into the hose. Enough to kill him when he took a drink from the garden hose after spraying. He had contaminated his own water system.

The Newton County Water & Sewerage Authority protects the water entering your system. However, it is your responsibility to protect the water on your property or in your home.

For more information on how to protect the water on your property, please call Bryan Bloodworth NCWSA Backflow Prevention at 770-385-3930.

Scroll to top Secured By miniOrange